When I discovered that my next assignment was to shoot images for the new KATEN — Summer Sky — Custom Image, I thought that this theme is one that I am very fond of and really is one that I’m best at.

Although the rainy season has begun on Ishigaki Island where I currently live, I can still see the skies that represent this time of year between the rains — a view in which spring clouds and summer clouds intermingle with each other. Unlike urban areas, this remote island in Okinawa has very few tall buildings. Its vast blue sky and boundless blue ocean make me eager to use an ultra-wide-angle lens. That’s why I like to keep certain camera-lens combinations handy at all times in Okinawa: the HD PENTAX-D FA 21mm F2.4ED Limited DC WR mounted on the PENTAX K-1 Mark II; and the HD PENTAX-DA 15mm F4ED AL Limited on the PENTAX K-3 Mark III.

This assignment was my first time to use a combination of the D FA 21mm F2.4 Limited and the PENTAX K-1 Mark II. I have used Limited-series lenses, such as the 31mm and 77mm models, on the PENTAX LX and MZ-5 cameras from the days when I shot film. Every one of them looked fashionable and provided a fine texture that optimized the handling comfort. I would love to keep them as part of my collection. Even though the 21mm lens looked slightly larger than past Limited-series lenses, I felt that it provided a perfect balance with the K-1 Mark II, which was also slightly bulkier than PENTAX SLR cameras of the film era. 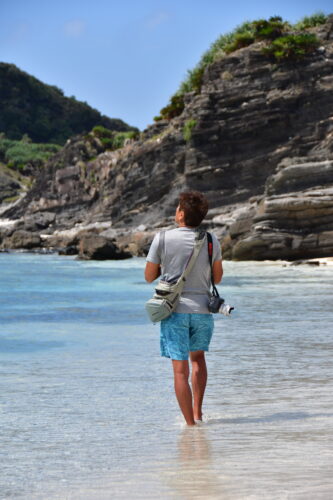 KATEN — the theme of my shooting assignment — is a special Custom Image mode available only when these two lenses are mounted on a K-1, K-1 Mark II or K-3 Mark III camera body. It’s a wonderful surprise for those who own these lenses and cameras. For those who don’t, it’s a special benefit that I think will make them want to purchase compatible equipment.

When I photograph Okinawa’s beaches and waters during the day, I normally use a circular polarizing (CPL) filter to more faithfully express the scorching sun, clear blue skies and beautiful ocean. This time, though, I captured all my images without a filter. When I took sample images in the past, there were some occasions when I sought the help of a polarizing filter. However, I held back on this, and worked using only the KATEN Custom Image mode. 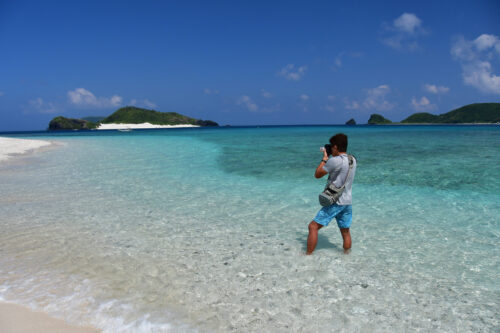 Since the firmware wasn’t yet ready at the beginning of the shooting, I captured images using the BRIGHT Custom Image mode instead. I was initially quite satisfied with the excellent resolution and the sense of airiness assured by the Limited-series lenses. When the firmware was completed, I was truly surprised by the resulting images of in-camera data development. They produced colors that were so familiar to me, as if I were using a polarizing filter. They depicted the blue skies and ocean of Okinawa exactly the way I visualized them. I was convinced that I no longer needed a CPL filter.

Of course, filter-free photography optimizes the performance of lenses and improves resolution and clarity. Without a CPL filter, I could also choose a shutter speed two steps faster, making handheld shooting with a bright, large-aperture Limited-series lens much easier and more feasible.

I decided that KATEN was the best Custom Image mode for me to visualize my beloved summer skies exactly the way I wanted. In the past, I was satisfied with the BRIGHT mode. Switching to this new mode, however, let me capture clearer, crispier images, as if a veil had been removed.

While a polarizing filter can produce similar blue skies, it can weaken dazzling reflections on the water. KATEN, on the other hand, retains the glittering reflections while capturing clear, crisp skies. In fact, it produces colors exactly the way I saw them with my own eyes. Since this Custom Image mode is also designed to express morning and evening glows more dramatically, I could effortlessly emphasize the intensity of Okinawa’s sunshine.

The combination of KATEN and compatible cameras and lenses provides me with a new option for capturing Okinawa’s images in the coming summer. I’m very pleased with, and excited about this new imaging tool.

The rainy season has just arrived on Ishigaki Island. The rainy season in Okinawa is often called karatsuyu (empty rainy season) because there can be little rainfall. This year, however, it has rained as much as on the Japanese mainland, probably due to the La Niña phenomenon. I headed for the northern part of the island, looking for the sun emerging between the rains. After the rain has removed dust from the air, cotton-white clouds stand out as if painted on the canvas of clear, blue skies, creating a very artistic scene. I used the KATEN mode to emphasize the contrast between blue and white.

Initially, I thought KATEN was best suited for blue skies during the day. However, it also enhanced the rich colors of the sky in this morning glow scene. I could express the intensity of Okinawa’s morning sunrays, which suggested the arrival of a very hot day.

In addition to the shooting on Ishigaki Island, I made a trip to Zamami Island in the Kerama Island chain in search of blue waters. After a ferryboat ride, I landed on an uninhibited island where I photographed breaking waves and deserted beaches. I normally use a CPL filter to emphasize the blue colors of the sky and the ocean. With the filter, however, I have to slow the shutter speed down by two steps. This slower shutter speed makes it difficult to freeze the splashing of the waves, unless I raise the ISO sensibility. When I coupled the KATEN mode with the 21mm lens, I could capture the images very close to those captured with a CPL filter, while freezing the motion of the waves in these beachfront scenes.

A squall was approaching this road, which led straight to the sea. Since Okinawa’s rainy season is usually the previously mentioned karatsuyu, it’s characterized by squalls caused by thunderclouds formed by a sudden, rapid rise in water temperature, rather than gloomy, all-day-long rains. Using the 21mm wide-angle lens, I captured the enormous thunderclouds heading my way in this well-balanced image. KATEN clearly conveyed the sense of summer using the contrast between blue skies and white clouds, while subtly depicting unusual colors in the lower part of the thunderclouds that hinted at the anticipated rain. The result was this dynamic, dramatic image.

I love to find narrow paths leading to the sea. When I travel on a coastal road, I always look for these paths. I visited this particular path for the first time. After walking through green bushes, I reached a deserted beach. When I came to a place where the green tunnel ended and the dazzling beach began, I decided to use the vegetation as a frame to highlight an image consisting of the pure-white beach and the deep-blue sea and sky. Since KATEN’s distinctive visual effects emphasized the contrast between blues in the ocean and sky and whites in the beach and clouds, I could clearly depict the Okinawan summer.

During the rainy season, Okinawa’s skies are amazingly blue when the sun shines. The mixture of spring clouds such as cirrus clouds and summer clouds like the thunderclouds changes the appearance of the sky in an interesting way. Since the remote island has few tall buildings, I want to capture the vastness of blue skies using an ultra-wide-angle lens. Even though I normally use a CPL filter to emphasize blues in the sky and ocean, I didn’t use any filter for this shooting, but instead used the KATEN mode. When I saw the developed image, I was surprised by the expression of blues, which turned out to be exactly what I had intended.

While walking on a footpath in a somewhat nostalgic sugarcane field, I got a real feeling of summer because of the huge thunderclouds. When the rainy season ends and the rain front moves north toward Kyushu, a strong seasonal wind starts blowing from the south in Okinawa. If I used a PCL filter to capture the scene, I would have to slow the shutter speed down by two steps, making the sugarcane leaves blurred. Because I chose filter-free shooting, however, I could optimize the sharp, crisp expression of a Limited-series lens to freeze the leaves’ movement.

A squall was approaching this road, which led straight to the sea. Thunderclouds were forming because of a sudden, rapid rise in water temperature, and they were heading my way. A squall was imminent. To express the spectacle and urgency of this scene, I decided to capture it in a vertical image. I also chose the KATEN mode to emphasize the contrast between blue skies and white clouds, and also to dramatize the dark shades of the clouds.

I captured the reflection of clouds on the calm water. Normally I would mount a CPL filter on my camera to capture summer images in Okinawa. This filter, however, has the negative visual effect of removing the sparkle on the surface of water. Coupled with the excellent imaging power of Limited-series lenses, the KATEN mode truthfully captures the reflection of white clouds on the water, while emphasizing blue tones. When I have to go into the water, as in this case, I prefer to use a faster shutter speed to prevent camera shake, while hand-holding the camera to avoid the use of a tripod. Since KATEN makes filter-free shooting possible and develops an image with a distinctive finishing touch, this creative Custom Image mode comes extremely handy in my photography. 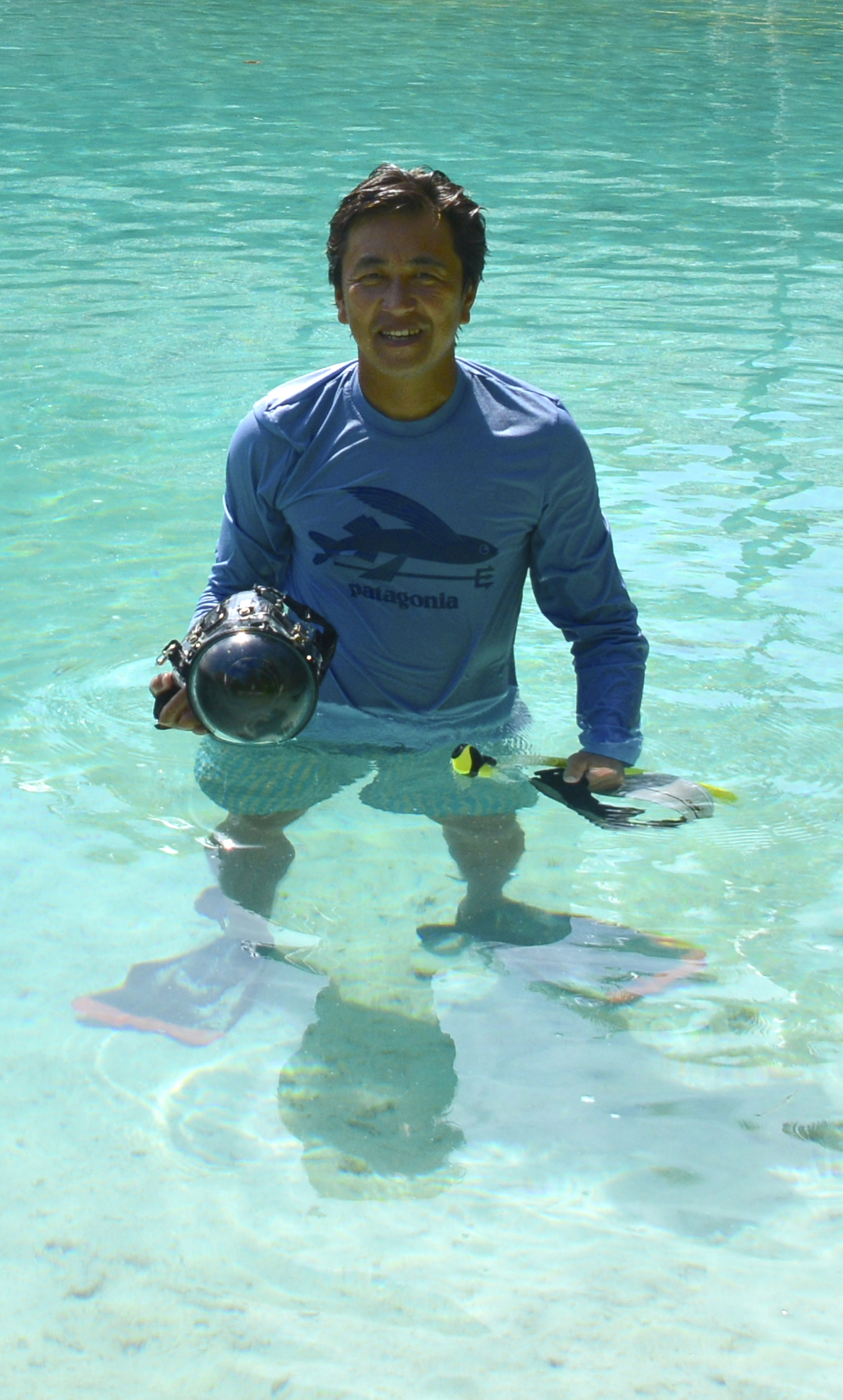 Born in 1966 in Tokyo, Kitajima moved from Tokyo to Kohama Island of the Yaeyama Island chain in 1987 as a marine sports instructor, and was fascinated by the island’s beautiful nature. He has been photographing landscapes, underwater scenes and resort images of southern islands, mostly in the Okinawa region, with a focus on the colors of the ocean, islands and skies. His works have been used on advertisements, magazines and web sites. He has 94,000 Instagram followers. His publications include: Himitsu no Okinawa (The Secrets of Okinawa) Spot Guide (published by X-Knowledge), which features all inhabited islands in Okinawa; Blue Winds — Kaze ga Hakobu Shiawase (Happiness Carried by the Wind); and Nature Therapy AQUA. His latest photo book Ishigaki was released in July 2021 by Ringo Promotion. He is an official member of Japan Advertising Photographers Association.
Instagram / Official Site